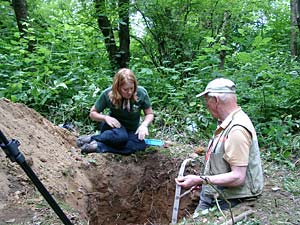 Two of soil science’s founding fathers, Dokuchaev and  Jenny, described the framework for  soil formation. Jenny in The Factors of Soil Formation (1941), designates the five factors that form the general theory for soil genesis:

These five factors in conjunction with soil processes are responsible for soil genesis.  The horizon differentiation that occurs as soils form is also called pedogenesis.

Generally, the processes are categorized into four groups: additions, losses, transfers, and transformations of substances in the soil. While some factors may seem to be more important than others in soil formation, this is not the case, since each factor is essential and none can be considered more important then any other.  Locally, however, one factor may exert a particularly strong influence.

Humans influence the factors and processes of soil formation in various ways.

Considering the five factors what ways if any, do humans influence or alter the factors?

To what degree can we impact Time? Biota? Parent material? Topography? And Climate?

Hans Jenny referred to humans as the “outstanding biological soil-forming factor” because of the degree to which humans can enact changes in the soil. Yaalon and Yaron termed the human-induced processes and changes that create an impact or alteration to the soil profile as metapedogenesis. The three aforementioned scientists were the first to begin placing extra consideration to humans in relation to the five factors of formation.  It may be that early soil scientists did not recognize humans as a major part of soil formation, but simply a part of the biota factor.  This may have been caused by lack of understanding regarding the rates of soil processes and the rates with which we could drastically change the soil. Currently, pedologists have focused attention on whether or not humans should be considered the sixth factor of soil formation.

Land Use Impact Tool is dedicated to Dr. Les Lavkulich whose initial study and unwavering dedication to soil science education has inspired us to develop this teaching tool.

THIS IS A CALL TO ACTION AREA

This is just an example shown for the theme preview. You can add text widgets here to put whatever you'd like.